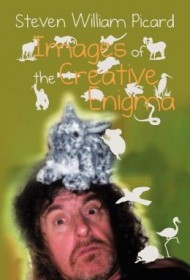 Steven William Picard’s Images of the Creative Enigma is an amalgam of short prose, hand-drawn comics, and lineated verse. The author invokes various lively speakers throughout his collection, including “Sir Charles Slime, ne´ Charlie Slime, instigator of wrath, self-doubt and atrophy, imminently awaiting all of you, humanoids!” and Madame Palm, who proffers advice such as “Do not, I repeat, do not leave your body parts haphazardly and irresponsibly scattered…” Picard also writes autobiographically in many of the prose passages.

Readers are likely to find this book by turns engaging and overwhelming. The genre, intended audience, and thematic focus are too varied to be clear and unified. Picard’s love of language, especially of puns, comes through in titles such as “Still Crazy After All These Fears!” and “Wind in the Billows!” However, his lack of stylistic consistency and thoughtful sequencing of individual poems, stories, essays, and cartoons results in a kind of form-and-content whiplash for the reader.

In the autobiographical prose passages, Picard’s writing tends to be too explicit—mostly telling exposition with very little showing detail. For instance: “In my teenage years, I was by now well entrenched in my own world” and “I fondly recall this story at times, and it makes me and others chuckle.” The fictional prose passages, by contrast, are much more dynamic and image-centered: “I watched open-mouthed as a Porsche of extraordinary proportions veered haphazardly towards the Alexandra Palace Car Park, intricately scything down everything in its path!”

The poems are often funny and snappy (“Praise the Comma!” begins, “Without the common comma,/ Our words just wouldn’t stop./ There would be no control,/ We’d talk until we drop!”). They make good use of rhyme, but unfortunately they also lack connection to any other material in the book.

Picard would do well to concentrate on developing discrete series of personal essays, playful poems, and character-driven flash fiction that can be presented together as part of a more cohesive whole.