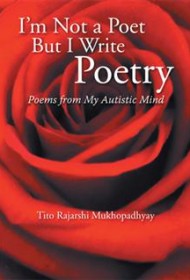 Though the rather literal title of Tito Rajarshi Mukhopadhyay’s collection of poems might indicate a pedestrian collection, I’m Not a Poet But I Write Poetry: Poems from My Autistic Mind surprises with its grace and variety. Before each poem, Mukhopadhyay gives readers some background about the poem’s inspiration, which is helpful and also creates an intimate, conversational tone to the book.

Many of his poems, such as “White,” have a special attention to color and include lively language play, as in: “There was white and white, / A kind of white in light, / A kind of white in shadow / … / What glamor in their show!” Similarly, “A House, Sunflowers and I” describes the aura as “Yellow around those flowers, / Lighting up a whole world with yellow corners.”

Mukhopadhyay employs a number of traditional poetic forms, such as the sonnet, ghazal, pantoum, and villanelle, as in the villanelle “Misfit,” in which he explores his “self-stimulating moments of hand flapping that makes [him] get noticed” and indirectly compares his soothing habit to the natural rotating of the earth and the soaring of birds: “Birds flew by all morning– / the sky lit / From the earth’s turning and turning.”

Though many of the poems, especially those about natural phenomena, have a gentle, observant tone, this collection also includes darker moods, as in “Sometimes He Sat in a Shadow,” which is a pantoum “from an Autistic person’s view” and includes images of alienation and conflict, such as “He named himself ‘The Day’, they argued ‘He is Night’.”

I’m Not a Poet will be enjoyed by readers interested in a self-assured and poetic voice informed by the experience of living with autism. Though Mukhopadhyay does not shy away from some of the radical differences of autism, the overall message of the book is the universality of the human condition.