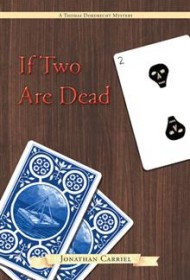 The year is 1762 and Mr. Sproul, a partner at the New York-based shipping firm Castell, Leavering & Sproul, is traveling from Philadelphia to New York City. When he’s found dead, his partners, employees, and family are all shocked; after all, Mr. Sproul was spry and in good health. Thomas Dordrecht, a young employee of the firm, wants to look into Sproul’s death, but doesn’t have the time because he embarks on a trip to the Caribbean on behalf of the firm. When he finally returns months later, he begins to poke into Sproul’s death and is shocked by what he finds.

If Two are Dead is the third in the historical mystery series featuring Thomas Dordrecht, though it functions well as a standalone novel. Author Jonathan Carriel has a master’s degree in history, and that shows in this novel. It is impeccably researched and the time period is brought to life by Carriel’s meticulous attention to historical detail. Carriel picked an exciting period in history during which to set his novel, and as a result, it functions as a fascinating backdrop for the engaging murder mystery.

Carriel’s writing is assured, precise and carefully edited. Often in historical novels, the dialogue is either overly modern or stilted and dated; Carriel deftly avoids either of these pitfalls with realistic conversation that is appropriate to the time period. Through the exciting storyline, he takes the reader on unexpected twists and turns, and as a result, If Two are Dead would make a history or mystery lover a very happy reader.