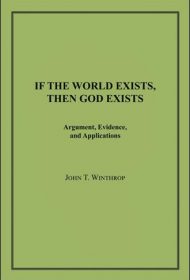 If The World Exists, Then God Exists is a sophisticated argument for the existence of God utilizing systems theory to supplement traditional philosophical methods.

The author, John T. Winthrop, is a physicist by training, and his writing is accordingly technical. He deploys algebraic shorthand in places where philosophy utilizes symbolic logic, which alternately lends efficiency and leads to obfuscation.

Winthrop overestimates the accessibility of his argument, but the details are straightforward enough. He embarks by linking the problem of proving the existence of an external world (inspired by Kant) and the problem of proving God’s existence. After apparently demonstrating a correlation between our minds’ empirical experiences and a corresponding material world (think Kant’s noumenal/phenomenal distinction), he leverages the Cartesian problem of mind-body dualism to suggest that there must be a real-but-immaterial, transcendent source for our material world. That source (necessarily, per Winthrop), must be God. Inevitably, a host of consequences follow concerning the nature of mind, free will, and morality.

Winthrop’s project is ambitious and thoughtful, but overreaching. He attempts to convince readers that his proof entails not just any god, but the triune God of Christianity, yet his arguments don’t necessitate that conclusion. A more accurate conclusion is that, granting Winthrop’s argument up to this point, a “transcendent source” of reality is consistent with a deity, but not necessarily any specific one. Winthrop’s assertions are even more tenuous when he attempts to derive moral realism from his asserted deity.

If The World Exists, Then God Exists is most successful if taken as an argument that belief in a deity is reasonable, rather than incontrovertible. Seen through that lens, Winthrop’s argument retains value, even when some conclusions are questionable. In any case, his thoughtful foray into oft-neglected philosophical territory, augmented by his unique scientific approach, supplies a provocative exercise for philosophers.