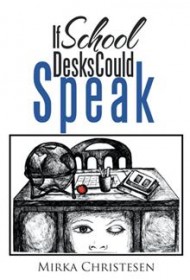 A veteran teacher who has won several awards, Mirka Christesen offers anecdotes from the classroom trenches in the United States and abroad.

Born and educated in Czechoslovakia, married to an American, the author began her career teaching English in Germany before moving to North Carolina, where she taught language arts and various electives in both middle and high schools. While a few scenes from her childhood and early teaching years noted here suggest that discipline is stricter in European schools, her reminiscences about missile-throwing boys and provocative girls in Germany make it clear that educating preteens and adolescents presents much the same challenges everywhere.

Judging by the stories told here, Christesen met those challenges effectively, displaying empathy for the emotional and hormonal turbulence her students were experiencing while maintaining control of her classrooms and making her expectations clear. She ignored the realistic drawing of a penis on a vocabulary quiz and gave the student the A that his perfect test merited, then sent a copy of the quiz to the boy’s father with a calm note asking him to address the issue at home. Dealing with a special needs student who was being mainstreamed, she let the girl take notes lying across the classroom threshold with a pacifier in her mouth, reminding herself to “allow for different learning styles.” On the single occasion when she lost it and yelled at a student who repeatedly and deliberately provoked her, it proved the right strategy; the boy actually thanked her for it later.

Some of the tales here feel slight, and though they would be fine anecdotes told over coffee in the faculty lounge, they don’t really merit inclusion in a book. Nonetheless, Christesen’s exemplary combination of a warm heart and a cool head make this a generally instructive portrait of what it means—and what it takes—to be a teacher.