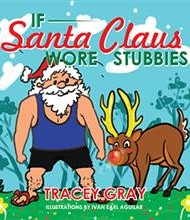 Santa Claus is known in many countries as a man dressed for cold weather, with thick boots, and a fur-lined suit and hat. But what happens when Santa visits Australia, where it’s sunny and warm in December? That’s the premise of If Santa Claus Wore Stubbies, a fun, light-hearted picture book by Australian Tracey Gray.

The book is an extended musing about what Santa would look like if he dressed more appropriately for Australian Christmas weather. The introduction to this concept is a little rough. Opposite an illustration of Santa weighing himself on a scale, Gray writes: “So to Santa, a suggestion, (and I’m trying to be polite!)/ You can be cool at Christmas here,/ without going on a diet!” It’s unclear what dieting has to do with keeping cool.

Nevertheless, once the subject is broached, readers are offered a series of amusing pictures and descriptions of Santa in “Stubbies” (a brand name for shorts in Australia), “thongs” (sandals or flip-flops), a navy “singlet “(sleeveless t-shirt), and a fishing hat with corks dangling from it, a classic image of an Australian outdoorsman. The final page offers a twist: “Now when I think of Santa in this/ dazzling summer outfit…/ He doesn’t look too bad!!!/ Why in fact…if we change the beard a/ bit, he just look like my DAD!!!!”

As shown in the above excerpt, the rhyme pattern is inconsistent, which makes the first read-through somewhat challenging. Still, the illustrations are competent and colorful, and Gray’s writing is mostly clear, although heavy on Australian slang.

The story is admittedly slim, but If Santa Claus Wore Stubbies is enjoyable to read. In addition to Aussies, it might particularly strike a chord for U.S. or U.K. residents who have ties to Australia, or vice versa. The book also helps give children a broader perspective, making them aware that not every place on Earth associates Christmas and Santa Claus with snow, hot chocolate, and a warm fireplace.