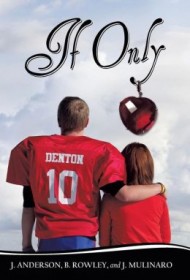 Spanning more than 40 years, If Only is a love story with football as a backdrop. As the title suggests, it addresses squandered opportunities. These are not missed touchdowns or field goals, but instances where the heart fumbles and is intercepted several times. The story is told retrospectively just before a wedding.

Bill Denton meets Sarah Ormond the night of his first varsity game. Bill is 14 years old when he becomes the starting quarterback for his high school team. He has a work ethic that never tires, a strong moral code, and, unfortunately, speaks like a robot: “My homework is calling me and I don’t want to stop speaking with you but I have to do so. I really look forward to seeing you Friday night.” Regrettably, the other characters’ dialogue is equally stilted.

Bill also has an array of too-good-to-be true attributes: he is well-mannered, pious, sensitive, self-deprecating and fully aware of his strengths without being arrogant.

The novel follows his meteoric rise in athletics. Throughout, Bill and Sarah’s relationship is frequently tested. Yet, each time they break up, he immediately falls in love with someone else; it seems his broken heart mends faster than it takes to call a huddle.

J. Anderson, B. Rowley and J. Mulinaro share authorship. Admirably, there is no distinct voice overshadowing another. The only indication that multiple authors are involved is found in inconsistencies in grammar, spelling and characterizations. (For example, an opposing high school player is identified as playing on two different teams in the same season.)

The authors’ account of fame’s toll on Bill and those in his life is intriguing. However, the Super Bowl of love between Bill and Sarah is less than thrilling due to the fact that the wedding, mentioned on the first page, is a spoiler. All flaws considered, readers are likely to find that this story fumbles more often than it moves stealthily downfield.