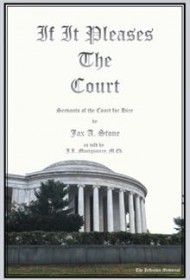 Few stories are more emotionally wrenching than those involving custody battles. We’re instinctively drawn to one side or the other and worried for the child. If It Pleases The Court sets out to win the reader’s sympathy for a mother and child.

There’s much confusion as to who wrote this book: It’s identified as being “by” Jax A. Stone, “as told by J. L. Montgomery.” A disclaimer explains that Stone wrote a novelization of true-life events “as stated by” Montgomery. A dedication and introduction further cloud things, as does an afterword crediting a ghostwriter.

The plot is equally hard to decipher due to the hasty, ungrammatical writing, but the gist is as follows: Jenny-Lee marries young and learns her husband is an abusive alcoholic. She escapes into the arms of a friend from school and discovers she’s pregnant, but goes back to her husband, who ramps up his attacks. This pattern repeats, and Jenny-Lee loses custody of the child, owing to collusion between her mother, husband, and the entire local law enforcement system.

Again, the writing makes the story very difficult to tease out, and readers won’t always feel sympathetic toward Jenny-Lee and her actions. For example, her lawyer tells her to behave in court, but she fails to do so, smirking and talking out of turn. It’s strongly implied that her husband is not the father of her child, but she refuses to have a paternity test, ostensibly to protect the feelings of an abusive monster.

The author’s introduction detracts from the serious tone Stone is trying for, with statements such as, “When you are dealing with folks who play ball in the gutter, you cannot use sugar-coated words to describe the actions of a rat.” And rants directed at readers split the focus even further.

If It Pleases The Court appears to have been a therapeutic story to tell, but it offers little that will please or engage readers not directly connected to the story.