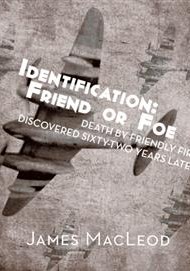 In the hierarchy of war’s horrors, death by friendly fire is among the most heartbreaking. Now imagine waiting 62 years to uncover the truth.

In July 2006, author James MacLeod, a California doctor who had been raised in Canada, got a phone call from one of his Canadian cousins that a terse notice had appeared in a local paper asking to contact family members of George Dewar MacLeod, a WWII Royal Canadian Air Force pilot shot down and killed in Belgium on September 29, 1944. James MacLeod was the pilot’s brother.

He responded to the newspaper query, setting off an exhaustive nine-month search to learn what really happened, ultimately shattering six decades of what a family had always believed. The unraveling of long-hidden facts led to the discovery that George Macleod and crew member Alan Charles Wiggins had not been felled by enemy fire but by their own countrymen in a tragic mistake.

Identification: Friend or Foe, is told almost entirely through letters and emails between family members of both airmen and a Belgium historian as well as inquiries and replies from the British Air Ministry, the RAF Museum, Canadian archives, and even the aircraft’s manufacturer. Perhaps most touching is the letter that finally arrives from the person who shot down the plane and had carried that guilt for more than 60 years.

It’s an incredible tale, told through the potentially interesting device of the correspondence. But while such sparseness lends credibility and showcases the painstaking detective work, it also proves to be the book’s biggest problem. The format is cumbersome and confusing for those not intimately familiar with the events. Important plot details, such as the RAF’s initial denial of friendly fire, are too easily lost. Readers would have benefitted with more narrative to fill in the gaps and relate the emotions involved.

This story deserves a revise, as it is too remarkable a tale to be left wanting more details.