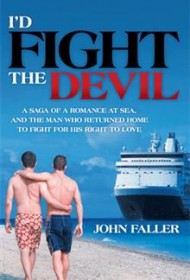 This engaging novel tells the story of a romance between two gay men.

Eager to find the love of his life, Doug encounters the dashing, handsome and confident Tim on a gay cruise. Although Doug’s fear of rejection causes much tension between him and Tim, he soon masters his fears and the two men fall in love with each other, making plans for a life together.

Sadly, events conspire to complicate their relationship: Doug must leave town soon after the cruise to see his dying father and comfort his grieving mother, while confronting homophobic family members. Soon after his return, he is faced with Tim’s ex-boyfriend, Brett, who is determined to ruin their relationship. To that end, Brett spreads rumors about Tim’s supposed infidelity.

Brett’s attempts to sabotage the relationship — resulting in attempted physical assault and kidnapping — veer into melodrama, which may be off-putting to readers. The rest of the novel, however, is a well-written, realistic depiction of two men falling in love and building a life together. Approaching the story mainly from Doug’s point of view, author John Faller shows a man learning to overcome hesitation and fear, and to fight for the man he loves.

The novel depicts Doug and Tim’s families in an uplifting light, particularly their mothers; while these women may struggle at times with the idea of two men loving each other, they fully support Doug and Tim, and help them through difficult times.

Anyone looking for a compelling story about two men overcoming obstacles to find true love will enjoy I’d Fight the Devil.