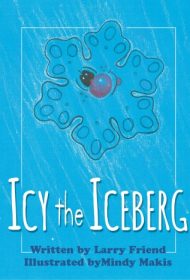 Icy the Iceberg follows a snowflake who becomes one with an iceberg and eventually melts, documenting the water cycle in an approachable way.

Icy is just a few particles of water vapor before his life begins, but he condenses in the cold air over Canada and becomes a snowflake. In this form, Icy drifts into a bed of snow and is soon covered over by other snowflakes. (Unlike Icy, these snowflakes don’t have any consciousness.) Over the course of 200 years, the snow presses in close enough that it becomes a solid mass, and one day the ice sheet breaks off and Icy becomes an iceberg. He meets many creatures during this time, including seals and otters, but when he drifts too far south, he dissolves into water particles once more and begins the process again.

Icy the Iceberg would be more successful with a more precise approach to storytelling. Instead, the narrative is padded by some unnecessary descriptions and occasional “telling” instead of “showing” (e.g., “Icy was very, very happy!”). There are also several instances of complex vocabulary that may make the text difficult for young readers to absorb, including “molecules” (which aren’t explained in any more detail), “particles,” and “fate.” Also, given that he melted near a tropical island, it also seems more likely that Icy would return as rain than as snow.

Finally, the art is unpolished, often appearing more like pages in a children’s coloring book than professionally drawn pieces.

Despite these shortcomings, this is a positive story. Icy is a likeable, relatable character, and the book’s approach to teaching the water cycle feels unique for its target age demographic. Overall, Icy the Iceberg is a pleasant way to introduce very young readers to the complexities of the water cycle.