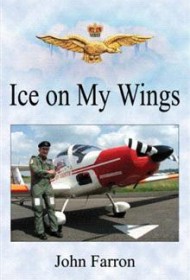 John Farron has an impressive past. Born in Britain during World War II, he became a squadron leader in the Royal Air Force Volunteer Reserve, was made a Member of the Order of the British Empire by Queen Elizabeth, and became a private pilot, husband, father, and businessman. That seemingly rich life, however, has been overshadowed by his battle with severe depression.

The term, “ice on my wings” is a friendly expression among military flyers that masks the seriousness of a situation. It’s an apt metaphor for the author’s lifetime affliction. Only in the last chapter does he write about conquering “IT,” as he calls the debilitating condition.

Early on, Farron explains that this is not an autobiography but rather a serious look at coping with depression. As such, the events of his life are touched on only briefly: the death of his first wife, a son’s near-fatal accident, a midair collision, heart disease, and a recent diagnosis of Parkinson’s disease. Most readers would likely want to know more, but it’s understandable that Farron would want to stay with his subject.

The book is an easy read, thanks in part to Farron’s writing skill. There’s gentle humor, such as when he recounts a brush with death as a toddler: “My entire life flashed before me, all two and a half years of it.” But there are also deeply serious passages such as this, describing his worst moments of depression: “It is blackness itself. Disease of the body, darkest day of the mind, the night of the soul, the loss of the spirit, the utter depth of hell.”

Ice on My Wings offers readers a distinct view of depression, presented by someone who has been there and can contribute to our understanding of a serious and growing problem.