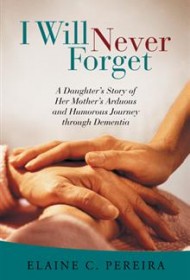 Anyone who has had to deal with an aging parent with Alzheimer’s will appreciate I Will Never Forget, the story of one woman’s descent into the vicious disease of dementia. Told by her daughter Elaine Pereira, Betty Ward’s tale is both heart-wrenching and humorous.

In Pereira’s stories of her childhood juxtaposed with her mother’s tale, Ward was intelligent, poised and energetic as a young woman raising three children, one of whom died as a toddler. Pereira was a feisty teen who had typical emotional meltdowns with her parents that usually ended with harsh words being said. By all accounts, Ward was always patient and respectful during these angst-ridden moments, which is probably where Pereira learned the same skills that would come in handy when the tables were turned and she was left to parent her parent.

Although the symptoms of Ward’s dementia set in long before Pereira was alerted to the problem, she was good at hiding them. Looking back, though, Pereira was able to identify a number of tell-tale signs that her mother was slipping. Some of the early incidents are funny, such as the time Ward asked Pereira if she could have her dog’s ears. But the humor wears off as the disease takes hold and what was once funny becomes harrowing. At one point, Ward wandered away in the middle of the night and was found more than five hours later nearly dead from severe hypothermia.

Just as her mother carried herself with grace and poise, so does Pereira here. The author carefully lays out how she went about making the tough life decisions for her mother, and exhibits the same patience and respect toward her mother that she experienced from her as a youth. With her detailed and well-written retelling of her mother’s story, Pereira has delivered an insightful read for those taking similar journeys.