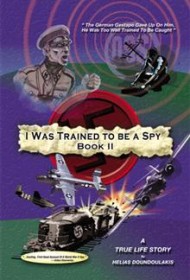 Helias Doundoulakis was just 18 when the Germans invaded Greece, ultimately leading him to become a spy for the U.S. and its allies. In his memoir, Doundoulakis shares his journey from innocent teen to skilled secret agent for a richly told story, packed with detail, color and plenty of hair-rising moments.

Born in Ohio to Greek immigrant parents, Doundoulakis was a toddler when his parents returned with him to Greece. He was in his last year of high school when he joined a resistance group led by his brother George.

The Germans eventually discover the group, and the brothers must flee. Aided by strangers, they escape through the Mountains of Crete. The last leg, led by a Cretan guide, requires the group to cover 40 kilometers in two days. Doundoulakis earns the ire of the guide through some ill-timed humor, and soon learns how treacherous the journey might be when the guide spots his old army boots, to which Doundoulakis has wired rubber for a sole. “As he walked by me … he glanced at my boots and said, ‘If they fall apart, you won’t be left behind,’” Doundoulakis writes. “ ‘Either you’ll run barefoot, or I’ll kill you.’ ”

The boots do fall apart, but Doundoulakis makes the trip. Soon, he finds himself learning to crack safes, send Morse code and skydive, among other skills. Back in Greece, he sets up a phony wholesale operation and, with the enemy literally next door, begins firing off the radio transmissions that will help send the Germans packing.

Written in a straight-forward but lively manner, this is a superb memoir, flawed, if at all, only by the author’s use of footnotes and chapter outlines – techniques better suited for a textbook. That aside, this is a book that any fan of a well-told tale will savor.

BlueInk Heads-Up: The Star designation is offered with the understanding that minor copyediting issues remain in need of attention.