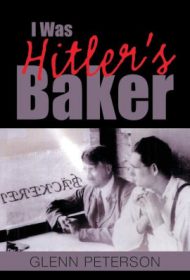 The protagonist of Glenn Peterson’s novel is none other than Hitler’s fictionalized childhood friend.

Narrator Josef Putkamer describes his friend Adolf as a mean, dullish bully, who threatened him with a Bowie knife to extort his lunch money. Young Adolf’s shakedown leads to his demanding two pastries per day from Josef, whose father owns the town bakery. Readers also learn how Adolf tortured spiders and demanded a blood-loyalty pledge from his “friends.”

Later, we watch the unbelievable happen through Josef’s adult eyes as he hires and then marries Freya, an unabashed Nazi, and finds himself baking Swastika-laden cookies for Brownshirts to keep his bakery afloat.

It’s painful to witness Josef’s fawning embrace of his “friend,” whom he quietly perceives as an evil-minded demagogue. Indeed, Josef describes a moment in his youth when he chooses to fight Hitler. Josef is bigger and stronger, but he allows Adolf to “win” the fight and himself to be a pawn of evil year after year as the Nazi baker. Josef’s eventual efforts to stop Hitler are too little and too late to change history.

The writing is serviceable, clean, and the author develops a familiar story from a unique point of view. Although Josef is a frustrating character, one begins to appreciate his moral dilemma in an age when all Germans were tested with similar choices.

On the down side, the plotting lacks tension, reading like a fictionalized documentary. And the author has modified some facts to dramatize the narrative—a risky move when writing about the most evil event of the past century. Readers are likely to look for verification from Wikipedia and other sources, taking them out of the story. An author’s note explaining what material is true and what is made up would have helped.

Still, the story is compelling, if only for the narrator’s insertion of his tale within Hitler’s larger story, which proves an intriguing method to convey Hitler’s well-documented rise to power.