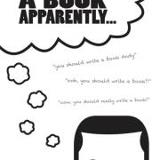 Andy W. wastes no time getting readers on his side by listing reasons we wouldn’t want to read about him. “I’ve not been on Big Brother,” he writes in the prologue to his profanity-laced memoir, I should write a book, apparently. “I’ve not shagged a footballer or been photographed falling out of a nightclub with my knickers hanging out – well, not that made the tabloids anyhow.”

By the end, though, he’s lost much of the sympathy he garnered so artfully in the first chapters. And that’s a shame, because he has a lot going for him, including an offbeat sense of humor and a story worth telling, about an ordinary life interrupted and misshapen by tragedy.

When we first meet Andy, he’s an irreverent 21-year-old Brit trying to pick up a girl in a bar. Thea proves to be the love of his young life for the six months they are together. Spoiler alert: She dies in a car accident that leaves Andy on life support with a fractured skull, ruptured spleen and three fractured vertebrae in his neck.

A deep depression lingers long after his physical recovery. He self-medicates with casual sex, binge drinking and long days in front of his PlayStation, a shallow existence readers must endure with him. He then takes his act on the road, boozing and shacking up with women on three continents, an equally shallow experience for all. (A typical encounter: “She was so, so cute, my heart raced./ “‘Ohmygodyouhavetotalktoher,’ demanded my over-active brain./ “Shut the fuck up, brain. What am I going to say?!”)

Too often, Andy tells rather than shows, as in: “…Keith was the funniest man in the entire world. What he did didn’t matter; he was the funniest guy I had ever met, seen, heard, or watched….” We can’t help but wish we were in on the jokes. In addition, he overuses words, such as “screaming,” “chick,” “literally” and “fuck” (which appears 464 times).

With careful editing, the memoir might have succeeded. As is, readers are likely to find it an overly long, repetitive journey that fails to live up to its early promise.