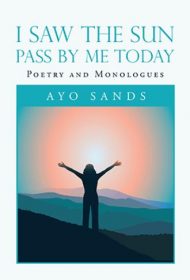 In Ayo Sands’s I Saw the Sun Pass by Me Today, the poet/speaker acts as a spiritual life-coach and motivational guide, addressing challenges in romantic relationships, the importance of self-love, and the value of religious faith.

The collection is comprised of lineated lyrics and prose poems arranged in seven small sections. The prologue establishes the tenor and intended audience: “To all the women in all walks of life, whether living vicariously or true/ and free,/ Let’s immerse ourselves in a journey for intense change.”

To that end, Sand offers advice in “Social Media”: “Believe in respect,/ and fake friends no longer/ They may have won the war/ But the battle is yours and it’s not over./ To believe in yourself is key!”

In “Some Say,” she discusses the difficulties of being a single parent (“I don’t sleep, I hustle/ I’m bottled up/ I’m angry inside”) before exhorting similarly challenged readers to fight onward: “Go hard in the paint/ Your work will not be in vain/ And it will show from within/ When you do it from the heart.”

While such sentiments are valuable, the poems mostly falter due to generic language. The poet relies on truisms and generalizations rather than fresh, incisive wording. The work is often purely expository, rather than utilizing poetic language distinguished by heightened attention to sound and image.

Occasionally, the author reveals glimpses of the crisp, showing details that could enrich her collection. “A Simple Life in God,” for example, notes that “It used to be the Indian Summers [sic], when the leaves would fall from the trees unevenly, exchanging the colors of red, brown, and orange.” This grounding in time and place draws readers in, as does “a new leather jacket for those brisk walks from work to lunch in the autumn afternoon.”

If such details were cultivated throughout, this work would be greatly enhanced. As it stands, the collection reads more as a self-care journal than affecting poetry.