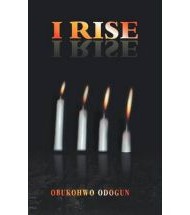 It’s hard to say whether political intrigue or family crises bring the most drama to I Rise, a novel by Nigerian author Obukohwo Odogun. Writing in English, which is plainly not his first language, Odogun weaves a complex tale of family separations and reunions, against a backdrop of political unrest and criminal activity in the central Nigerian township of Saminaka.

There is much excitement in the early chapters. The action centers on a devoted married couple, Elijah and Miriam, who are trying to create a secure life for themselves and their twin sons, Zachariah and Daniel. At the same time, a baby boy named Yusuf is found abandoned at the local school.

Then authorities accuse Elijah of playing a part in a robbery at his workplace. He languishes in jail amidst career criminals with colorful names like Scorpion and Smallpillow. It takes an enormous amount of patience and perseverance for Elijah to resolve the many questions raised in these early scenes.

It also requires perseverance to make it through Odogun’s story, as it is written in the awkward prose of an inexperienced English speaker. Odogun writes: “Miriam presence was more than the food she brought for Elijah. To him, it was aptly the strength that was missing in him and he has now found.” The meaning is there, but it takes some digging to get at it. As the novel is laden with similar sentences, along with a wide variety of spelling errors, grammatical mistakes, and mid-sentence capital letters, it can be slow going for the reader.

Odogun, a politically active lawyer, clearly knows his city and his people, though. For readers who stick with him, their reward is a personally-informed perspective on a modern Nigerian community.

BlueInk Heads Up: In spite of the awkward use of English by this Nigerian author, the story provides a detailed look at modern culture in central Nigeria.