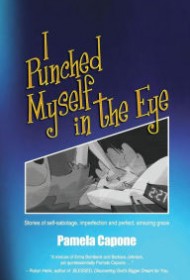 In this engagingly written, faith-based essay collection, Pamela Capone finds the humor and grace in ordinary —and sometimes extraordinary— situations. Capone has coined the term, “messay” for her prose, a combination of “messy (informal untidy, embarrassing, difficult)” and “essay.”

The title, I Punched Myself in the Eye, refers to the time when Capone shuffled out of bed, only to find that she had given herself a shiner with her own fist during a dream. More than a few of the essays are poignant and thoughtful, rather than out-and-out funny – albeit handled with Capone’s appealing light touch and conversational style.

Adopted at 18 months by her foster parents, after her birth parents were charged with child neglect, Capone writes many of the essays as reverent tributes to the parents who raised her and to her birth siblings, with whom she has a special bond. She also writes about her work at a girls’ school in Guatemala and about helping in Haiti after the 2010 earthquake.

Her most amusing essays are observations from her own life as wife, mother, and sometimes stand-up comedienne and actress, which lead to bits on everything from her mean second grade teacher to cute kid stories to acting mishaps. After she scores a wrinkle cream commercial, she notes, “Apparently, they felt my wrinkles were up to snuff…”

There are times when Capone hits the puns a little hard – “Yosemidiots,” “yosemnutty,” “Yosemite Pam” – and some readers may find her “messays” a little too pat as she ties them into neat bows often overlaid with a religious veneer. Still, her ability to make interesting observations and find the gentle humor in life is an achievement readers will appreciate — and one that should erase any lasting chalky residue from that mean second grade teacher.