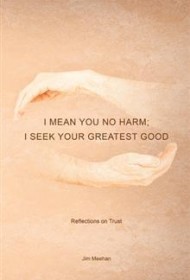 In I Mean You No Harm; I Seek Your Greatest Good, author Jim Meehan frames musings about his life and work around the phrases of the title. The result is a book that’s part self-help and part memoir.

Meehan was born in Liverpool in 1942, and occasionally compares his life’s progress to that of his contemporary, Paul McCartney. Initially studying for the clergy, he elects to change paths and becomes a human resources manager, and then goes on to study psychology. While relating the stories of these transitions and the people he meets along the way, he reflects on whether each person embodies the notion of meaning him no harm and seeking his greatest good. Some fail this test, but many appear to have his best interests at heart, and he remembers them fondly.

Meehan writes in a chatty style, whether he’s analyzing McCartney’s lyrics to Oh! Darling, which contain the line, “I’ll never do you no harm,” or noting that he has a daughter named Larissa, which is coincidentally the name of the Greek city where Hippocrates (of “first, do no harm” fame) died. Unfortunately, this anecdotal approach makes for a choppy narrative. For the story to pull readers in, it requires more action, or rumination that’s far more structured. As it stands, we toggle between job changes and musings on trust and intimacy, which don’t feel like an organic pairing.

Meehan’s title is thought provoking, and he has a lot to say about relationship issues; there’s a solid self-help book hiding in here somewhere. But he’d do well to separate the memoir from that mission and use personal anecdotes sparingly to illustrate his points. I Mean You No Harm; I Seek Your Greatest Good is a kind sentiment, but the book’s lack of focus needs to be addressed before it can satisfy a wide audience.