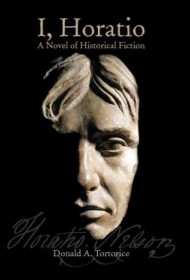 After five decades immersed in the life of Lord Horatio Nelson, retired Philadelphia law professor and former U.S. Navy officer Donald A. Tortorice has brought his devotions to the page. This overlong yet elegant historical novel, written in the imagined first-person voice of the complicated British naval hero, takes readers from his beginnings as an ordinary seaman to the moment of his death—by a French sharpshooter’s bullet– at the Battle of Trafalgar in 1805.

Gossip-mongers, take note: Nelson’s notorious affair with Lady Emma Hamilton gets the full treatment, if only from his point of view.

Tortorice follows in the wake of a dozen competent biographers, but his novel is a worthy addition to the groaning shelf of Nelsoniana. The story has been exhaustively researched by a keenly observant lawyer, is smartly convincing and—to mostly good effect—brims with admiration for “a man of unparalleled and fascinating measure.” Is it hagiography? Yes. Slavery to myth? No.

Nelson emerges here as a master strategist (conquering hero of the Nile, Copenhagen and Naples), a shameless egotist (“I was surprised and delighted that accounts of my actions had preceded me”), a servant of God (“yet again He has spared me”) and a helpless ladies’ man (“one whose heart was, I admit, vulnerable to the appeal of any attractive woman”). We are also reminded of some delicious Nelson details: The admiral suffered all his life from seasickness, and his corpse was preserved in a cask of brandy (this from the epilogue).

Tortorice’s battle scenes are exciting, if a bit overwrought, and he reproduces the formalities of period British rhetoric without sounding stuffy. Here’s Nelson with Emma: “We wanted to avoid high entertainment, preferring to lead quiet lives.”

There was, of course, very little quietude in Nelson’s tumultuous life, and Tortorice has ably re-created both the thunder of the deck guns and the pounding of one man’s heart.