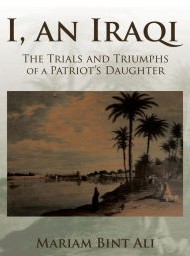 In I, An Iraqi, author Mariam Bint Ali writes about her friend whose father was the Iraqi prime minister, enjoying privileges that were quickly erased as World War II forced the family into exile.

The author’s friend, Amel Al Gailani, was born in Baghdad to a then-wealthy family whose lineage traced back to the Prophet Muhammed. Photos included in the book show a family enjoying an elegant estate, opulent weddings and great wealth overall. But war forced them into hiding in Germany when the British attacked Iraq in 1941, after which they spent months in an Italian concentration camp. Only later did the family escape to Saudi Arabia, by which time they had lost friends (who would not acknowledge them for fear of persecution), family who died during the ordeal, any semblance of home and virtually all of their belongings.

This is without question a gripping story, so it’s unfortunate that Ali devotes nearly a third of the book to ancient Middle Eastern history. While some background is helpful, devoting so many pages to such material lends an unbalanced feel to the narrative.

A writing style that seems equally overwrought and unfocused adds to the problem: “She was unaware at the time that it was destined to be a lifetime of emotions and feelings that were going to experience a roller coaster ride in this unfair fanfare of life.” As this example also illustrates, grammar errors are common, and far too often the text employs too many words to impart very little.

The Al Gailani family story is one worth telling, and the family is fortunate to have a friend willing to make the attempt. Unfortunately, the author’s ambitions outweigh her ability to make the story come alive. Due to the issues mentioned above, the story ultimately fails to engage readers in a meaningful way.