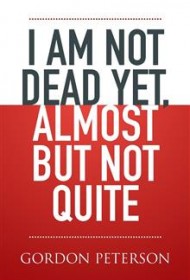 Gordon Peterson’s title to his memoir certainly grabs attention and suggests a droll, irreverent look at his life.

Unfortunately, the book doesn’t live up to its billing, as it’s unclear what the author is aiming for here. The book offers no cohesive story; instead, the author seems to have jotted down random memories in jumbled, stream-of-consciousness style — recollections ranging from his pets and vacations to favorite foods, relatives and the cars he has owned. Any of those might be worth exploring or using as metaphor (think Travels with Charley), but here they are simply cataloged recollections in short bursts without depth. They are often difficult to follow and, thus, difficult to care about.

“I have many relatives, even though many have died,” Peterson writes in dry, spare style. Maybe he was trying to be glib, but without elaboration the comment falls flat. That’s a shame because buried in the odd, stripped down prose is a real life, both tragic and humorous, that is never explored. In two sentences, Peterson writes: “In 1954 my father decided to end his life by closing the garage door and starting the car. Why he did that I will never know.” In the next paragraph, he tells readers that his mother got a job with a grocery store chain. This bland understatement about a tragic event is disconcerting and disappointing.

Peterson also writes of the famous people he says he has spent time with, including Celeste Holm and Hermione Gingold, whom he claims to have called for a lunch date after finding her phone number. He says he did the same with Julia Child. Both accepted. Such revelations are incredible — yet jarring, tucked in the same book as his reminiscence of a pet goldfish that the cat ate.

It could be that the author is quite funny, and after sharing his tales, his friends insisted he had a book in him. Maybe he does, but this one isn’t yet ready for general readers.