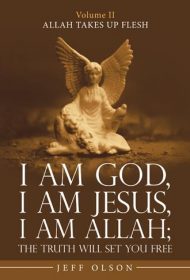 Jeff Olson’s novella tell the story of a protagonist named Jeff, who struggles with Satan, and many other issues.

This is a difficult narrative to follow. Divided into short chapters, the narrative shifts back and forth in time without warning. The main character, Jeff, is also referred to as “Allah” and “I.” Events have little, if any, context.

The story begins by recounting Jeff’s childhood, during which he had “many paper routes,” and in summertime, along with his brothers, he “detached the tassel on corn to make money with their Mother and Grandmother Lorraine Fredrickson.” When “I was around 14,” he notes, “…Satan pulled me out of my body and I told him to leave me alone.”

The tale progresses with run on sentences, abrupt changes in first and third person, and baffling leaps of time. Jeff joins the Marines (“God told Jeff to join the Marines”) yet also works evenings at Taco Bell. He mentions a son, Noel, “being killed on the cross,” and later refers to a son named Jake, “short for Jacob to throw Satan off the child.” It’s unclear if these are different children or the same, and sometimes Noel is referred to as Jesus.

There are interludes about Jeff’s failed first marriage, Buddha, the Koran, “The Popes,” Hitler, a trip to China “where I was at my most heavy weight. All the people of China thought I looked like Buddha and wanted their picture with me.” He mentions Satan as “the trickster no doubt behind the Coronavirus. But God may have sent him.” Many confounding discussions occur about Allah, God, Satan, Jesus and another wife, Oceanna.

The book is rife with misspellings: “Muhammad agrees he did not right [sic] that hateful writing”; “’What is Hell?’ Satan smiled and said ‘Tell the people that is the place where I will be to torcher [sic] them for all time.’”

In short, this book requires major revision in order to be comprehended by readers.