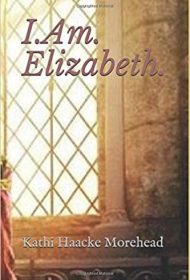 With this novel, Kathi Haacke Morehead never intended to write a historically precise biography of Elizabeth of York, Queen of England, wife of Henry VII and daughter of King Edward IV. “It has always been, and remains, my sole purpose to write a good story that people will enjoy,” she notes in the Foreword. And that she has.

Morehead began the novel after discovering she was related to Elizabeth of York through her paternal great-grandmother, Annie Campbell, who spent much of her life in a mental institution. The author uses what little historic facts are available for the two women, conjecturing about the rest.

The novel begins with Annie, hospitalized for years and mute after the accidental death of her husband and son, for which she feels responsible. Elizabeth appears to her and begins talking about her own life, instructing Annie to write it down. It’s a clever way into the cloudy history of Elizabeth’s family, running from her carefree childhood to the convoluted politics of court as the War of the Roses between the York and Lancaster families for control of the English throne unfolds.

The author’s imaginative details make this an enjoyable read. For example, Elizabeth describes her family’s anguish when her two younger brothers disappeared from the Tower of London, and the story offers an answer to the long-simmering question of what happened to the boys. Morehead even softens the historic view of Richard III as a vile political creature and invented a happy marriage for Elizabeth.

The Queen is a fully developed, fascinating character. As the vehicle for Elizabeth’s account, Annie is understandably less defined, but memorable nevertheless. One weakness is the inclusion of the nurse, Claire. While sympathetic to Annie, whom she hears talking to herself, she doesn’t enhance our understanding of Annie, becoming a minor irritation.

Readers who keep in mind this is historical fiction, emphasis on fiction, will enjoy I. Am. Elizabeth. for what it is—a captivating read.