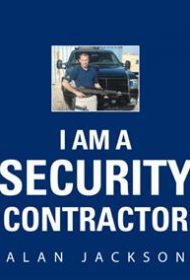 Most accounts of the work of personal security companies operating in Iraq and Afghanistan are written by journalists, academics, and professional writers, notes Alan Jackson. “These people may be very knowledgeable about the subject matter, but they don’t have the experience that I can bring to the table.”

Indeed, Jackson’s experience is impressive. He spent 12 years in the British Army, three providing security for the U.N.’s International War Crimes Tribunal, and five as a private security contractor in Iraq. He also re-enlisted with the British Army, which deployed him to Afghanistan for six months. Today he works maritime security. His goal with his book, he says, is to shed light on the industry through his experiences.

Although the pay could be good – more than $100,000 a year – conditions were not. The work was dangerous; he lost several buddies when convoys were attacked by insurgents, who found it easier to target the under-equipped contractors rather than well-armed coalition forces.

To make things worse, workers were often told, falsely, they’d be deployed to secure parts of Iraq when they were sent to hot spots. They were issued rusty, broken or outdated weapons, and employers falsified reports and reneged on insurance coverage. But because they were “just” contractors, Jackson and his cohorts had little recourse. “If we got killed…it didn’t make the headlines as much as military personnel getting killed in the line of duty.”

This is a compelling and important subject, and Jackson’s narrative is straightforward and interesting. The book can get overly technical at times (Jackson writes of an armored vehicle:  “The ballistic specifications of what these Opaque Vertical Armour Level Euro Norm E1063 B6s could withstand were as follows…”), and occasional typos appear (“I had know [sic] Stu . . .”  and “Eventually the [sic] found it …”).

But these are small detours. Overall, Jackson’s book provides a fresh perspective on the role of private contractors, one that readers should find intriguing.