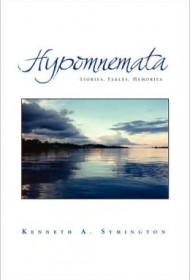 Unlike many collections, Hypomnemata is not limited to similar types of writing or themes. Symington groups his pieces by description: “Stories That Have Something to Teach,” for example, and “Stories For Fun” (many of which are poems). The least approachable are those he describes as “Knowledge Stories,” many of which have the tone of lectures. They are written by an intelligent man who enjoys riffing on the subtle distinctions between delusions and illusions, or all the words in Webster’s that mean “bad.”

Symington excels at people stories, using lively writing to recount a Japanese legend about the importance of cats in meditation or the tale of a woman who couldn’t rest until she had consummated her attraction to a co-worker. His sense of humor and humility are obvious throughout, especially in an essay in which he considers the possibilities of exchanging oneself for better merchandise at Cosmic Creation Inc.

While his book is a smorgasbord of ideas, readers may wonder what great things the author could accomplish if he stuck with just one and developed it into a longer piece. Reminiscences of his 99-year-old mother and his Cuban grandmother are especially powerful, providing candid glimpses into the author’s heart and mind.