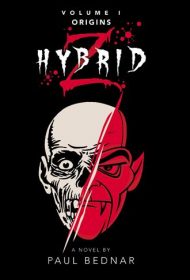 With Hybrid Z: Origins, Paul Bednar melds the horror and warfare genres into a compelling read.

This novel, the first in a series, begins in 1906, as Edward Keane meets sickly but attractive Tindra Ericksson on a ship, an encounter that later results in his transformation into a vampire. It quickly shifts perspectives to the Afghan-Soviet war in 1987, when the U.S.S.R. releases a new virus-inducing, biochemical agent on the Afghans, which turns them into zombies.

The narrative features three major threads: Edward’s affair with Tindra, his vampire lover; the machinations of Boris Dalca, an “elder vampire” who wants to dominate the human race by stealing the virus (and was also Tindra’s creator and master); and a group of Americans dubbed “the Ghost Team,” who are tasked during the 2002 US-Taliban war with cleaning up the region’s remaining zombies and, later, guarding a facility where scientists investigate the zombies and discover a vaccine.

Bednar’s narrative moves quickly and effectively, with smooth shifts in time and perspective that keep readers engaged. As the novel drives to its surprising climax in 2016, all the major players wind up in close geographic proximity, priming readers for a direct confrontation in future novels.

The author’s attention to detail, both historically and in the technical specifics of combat and scientific investigation, ring with authenticity. On the down side, the dialogue can seem overwrought. (At one point, Boris threatens: “Tell me the truth about the Berserker virus or I will keep you here in this shitty apartment and torture you until you are nothing more than a mindless turd writhing in ultimate pain.”)

Also, early on, Bednar introduces demon hunters who initially drive Tindra and Edward together. While it appears they will play a major role, they gradually disappear, becoming something of a red herring.

As the plot gallops along, however, readers will likely overlook such issues to see what comes next, making Hybrid Z a page-turning pleasure for genre fans.