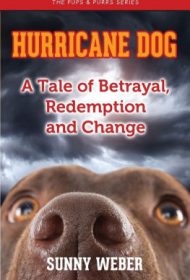 This inventively told novel for young readers relates the story of Gator, a pit bull mix, and his fellow dog-companion Magnolia, who struggle to overcome unexpected obstacles and a sense of betrayal.

Told from Gator’s perspective, the story recounts how Gator and his young owner Gavin discover a secret puppy mill and meet Magnolia, a dog who has spent her entire life a prisoner. Rescued by the authorities, Magnolia is adopted by Gavin’s family. She gradually begins to trust humans and forms a close bond with Gator.

Later, though, Gavin must tearfully abandon the dogs in a hurricane, as the rescuers don’t have room for animals on the boat. Not understanding, Gator is heartbroken and grows to hate Gavin, calling his abandonment “the Great Betrayal.” Because people fear pit bulls and Gator refuses to be separated from Magnolia, they have trouble finding a permanent home. Even after they are eventually adopted, Gator wonders when the next betrayal will happen—until a fortuitous coincidence leads to a touching conclusion.

The story features a well-balanced mix of action and drama, with emotional scenes as well as humor. Author Sunny Weber perfectly captures Gator’s point of view, calling Gavin’s parents “Big Man” and “Beautiful Lady.” In one amusing passage, Gator remarks that Gavin and his friend walk past “some of the best smells” without recognizing the sensory joys. “They never used their noses!” he says.

The hurricane’s destruction is relayed in frightening detail, with rising water and the smell of feces, and Gator’s growing hatred towards Gavin almost radiates off the page. Toward the end, an unexpected revelation brings about a powerfully emotional scene; even this adult reader got teary-eyed!

Hurricane Dog offers keen insight into a dog’s emotions and intelligence, while delivering an important lesson in forgiveness. Although a key plot twist is hard to believe, the novel’s unique characters, thrilling story, and easy language make it a compelling read for young readers and animal lovers alike.