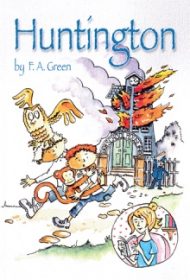 F.A. Green’s book for teen readers follows two separate narratives, that of Nesta—a modern-day girl who’s been suspended for allegedly setting her school on fire—and a group of children who lived in Nesta’s town 100 years ago.

During her suspension, Nesta reads a book called Huntington, which follows the titular boy and his friends. Nesta discovers startling similarities between her situation and the story the book chronicles.

Most of Huntington’s narrative follows the book’s story about Huntington and his friends, who are sent to a rectory. They’ve been accused of arson, among other crimes, and face life with a strict professor, questionable constable, and zealous reverend. When the reverend goes missing and the boys search for him, the young friends encounter a beast and must unravel a series of lies to learn the truth about their heritage.

Readers see each chapter of the book Nesta is reading, followed by a brief scene with Nesta herself. Mostly, Nesta’s narrative asks questions reflecting on the Huntington story, an approach that distracts from the action and causes the pacing to drag.

Overall, the book is difficult to follow. There’s a large cast of characters, and the pages are packed with dialogue that tells about, rather than shows, what’s happening. (“She stood in front of the door so I couldn’t get to it, but I tricked her by saying the beast was already free. She ran…”)

The book also delivers a heavy-handed religious lesson. Repeatedly, characters declare that they’ve given their life to Jesus, or that someone else must. The mysterious beast becomes a representation of the crucified Jesus Christ, portrayed with thorns in its mane and paws to signify Jesus’ crown of thorns and the crucifixion nails, respectively.

Ultimately, Huntington will be a challenging read. Its confusing storyline, lack of vivid action and didactic moralism are likely to limit its appeal to its target audience.