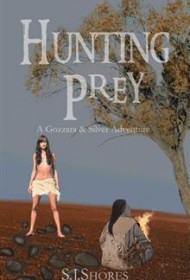 Structurally reminiscent of sci-fi action-adventure flicks like Prometheus, Predator, and The Chronicles of Riddick, S.J. Shores’ slender novel, Hunting Prey: A Gozzara and Silver Adventure, reflects the author’s love of brutal, bloody space-horror. Half space opera, half fish-out-of-water story, the book splits most of its time between Gozzara, an enormous, brutal, intergalactic hunter, and Silver, a human female who has had her memory wiped by space aliens.

The novel begins with Gozzara, as he pursues a rare and difficult prey, the tenke cat. Though Gozzara’s hunt is successful, he is injured during the fight, which forces him to fly his spaceship to another planet. There, he finds a human female who has been abandoned by aliens who previously abducted her from Earth. Unable to remember her past, she has named herself Silver and learned how to survive. After she heals Gozzara’s wounds he takes her as his companion—though others in his culture view her as a slave—and they have adventures together, ranging from training young hunters to escaping those from Gozzara’s world who would see Silver put to death.

There is an intriguing vision behind Hunting Prey but, sadly, it is buried under uneven pacing and a dire lack of editing. The novel reads as though it were written and published with no intervening consideration. A sentence on the very first page — “The night air was so thick it was hard to breathe as dawn approached the mist enveloped the jungle like a shroud.” — is typical of the prose, which sometimes makes it difficult to understand what is happening. This is unfortunate, because Gozzara’s Predatoresque culture and Silver’s transformation from uncertain amnesiac into a cold killing machine is the stuff of good pulpy sci-fi escapism. More attention to mechanics and style might have made this a winner.