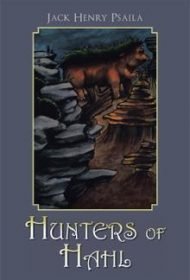 The book kicks off 100 years after the destruction of the Great Dahrk Village by a colossal monster known as Preature, which caused the splintering of surviving members. Psaila takes time to delve into the lives of the Hahls, a tribe made up of proud hunters, wise elders and hopeful youths.

We meet Aldra, the tribe’s lead hunter and descendent of the great warriors of the Great Dahrk Village, and his son Jackal. There’s Sàid, a youth with a mysterious bloodline, and Ilana, the daughter of another of the tribe’s hunters. The author details the group of elders who steer the tribe and explores the rites and rituals rooted in the Hahls’ hunting lifestyle.

Only after all this does Psaila dive into the book’s central conflict: The Hahls are dying out, and they must forge alliances with other tribes to face Preature in an ultimate, man-versus-monster showdown. The Hahls work to make ties with the Fury Pride and the Dahrk Clan groups to unite against Preature.

The epic battle that results is standard fantasy fare and provides a serviceable climax to the story. More prominent in the tale, however, is the author’s description of the Hahls’ customs, mores, and history, which offers a degree of detail fitting of a National Geographic documentary; for example, Psaila scrupulously explores young Jackal’s training as a hunter and the tribe’s preferred methods of capturing bears, buck gophers, squirrels and small birds. This element is a key strength in a book that could benefit from a more complex overarching plot. Unfortunately, the broader conflict with Preature lacks nuance and depth and fails to raise substantial moral themes.

The author’s eye for human interactions maintains interest even through the story’s less engaging epic fights, battles that will feel overly familiar to fantasy fans. It’s an unusual approach that some readers might appreciate.