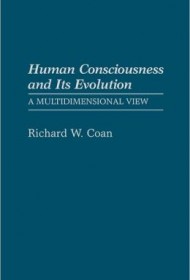 In the preface, the author admits the enormity of the task and stresses that his is but one contribution to a field addressed by scores of philosophers, theologians and psychologists. After laying some foundation regarding various evolutionary theories, the author gives detailed presentations on consciousness theories articulated by a wide swath of thinkers, including Aristotle, Augustine, Darwin, Freud, plus Eastern traditions, including Hinduism and Buddhism.

In doing so, Coan presents each of these thought systems as representing valid paths towards fulfillment, enlightenment, etc., and synthesizes these into five distinct “modes.” Despite great variations between these schools of thought, Coan maintains that flexibility will lead to a global sense of unity.

The author sees his work as occurring along a continuum: the book represents his modern effort to explain the various paths to fulfillment, which he views as the product of centuries of evolution of human consciousness. He states that if we leave a more thorough “record of our own experience,” our posterity will be able to better examine their state of consciousness, and through continued evolution, the various paths will ultimately be reconciled with each other, resulting in a newfound level of global harmony.

The book’s encyclopedic nature will intrigue curious readers, who are likely to find the treatment of topics from the history of philosophy, theology and psychology reminiscent of college humanities classes. However, this strength is also the book’s weakness. In trying to be comprehensive, the author tries to accomplish too much in too little space and some of his ideas can be difficult to absorb. In addition, the excessively formal tone makes digesting the book’s contents more challenging.

In sum, Coan provides an intriguing look at some of the most mysterious questions of human existence — but the effort required to get through it may dissuade some readers.