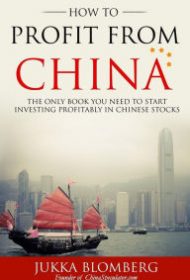 Throughout its history, China has often been perceived by Westerners as a land of mystery, and the same can be said of the workings of its economy and the stocks of Chinese companies. Jukka Blomberg sheds light on the latter two in his book How to Profit from China, analyzing the Chinese economy as a whole, and more specifically, the stocks that investors can trade to profit from China’s continued growth.

In the past year, many Chinese stocks have dropped precipitously, a fact that Blomberg addresses in an epilogue, and an event that makes clear the risks of trading in Chinese stocks. Blomberg notes in several chapters that Chinese companies are not always forthright with their financial information, and he details the differences in reporting standards among listings on the New York, Hong Kong, and Singapore stock exchanges, a critical factor in sifting through the great variety of Chinese stocks. Based on China’s own five-year plan, he offers a convincing analysis of which sectors of the Chinese economy are poised to benefit from the country’s expected shift from industry and manufacturing to the consumption of consumer goods.

Blomberg, founder of the website ChinaSpeculator.com, demonstrates his experience and his honesty throughout the book: He guides investors through the buying and selling process, and profiles many companies that could have great profit potential for investors, but he is always clear that additional research needs to be done by investors themselves.

The author does an admirable job paring down to the essentials of such a vast and complicated topic, although he does occasionally lapse into investment slang, such as “Stay exposed to the potential ten baggers [..]”  (a “ten bagger” is an investment that appreciates to ten times its purchase price).

Filled with charts and graphs, How to Profit from China is undeniably thorough, comprehensive, and instructive, and would prove a valuable tool for those wanting to invest in Chinese stocks, whether veteran traders or neophytes.