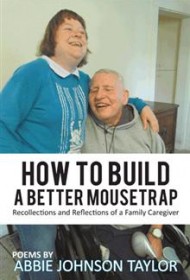 Abbie Johnson Taylor describes caring for her blind and partially paralyzed husband, Bill, and for nursing home residents where she worked as a registered music therapist in this slim poetry collection. Visually impaired herself, Taylor struggles with emotional and physical challenges resulting from Bill’s two debilitating strokes in 2006 and 2007.

Divided into four sections, the book discusses life with her husband, followed by three shorter segments on childhood memories, general reflections, and the elderly. Mostly free verse, the collection includes a shape poem, “On a Summer Evening,” where words on the page resemble a Christmas tree.

The most striking work appears in the first section. Unpretentious and understated, the book begins with “The Day My Husband Had a Stroke,” in which Taylor performs with a singing group and anticipates arriving home for a spaghetti dinner. “At seven, I’ll be home, expect to find supper on the table – / instead, he’ll be lying on the floor. / Our lives won’t be the same.”

Likewise in “Awaiting the Return of the Better Half,” she addresses personal hygiene issues in a simple, direct, and almost light-hearted manner: “When I enter the room with a cheerful greeting, we embrace. / He tries unsuccessfully to kiss me while laughing. / Then, offering the urinal, he says / “I’ve got something for you.”

Although a loving tribute to her husband, How to Build a Better Mousetrap can sometimes be a jarring read. In writing a few poems, such as “Stroke,” from Bill’s perspective, Taylor introduces a confusing element to an otherwise straightforward collection. Are these pieces reflecting her ideas, his ideas, or both? The poem “A Secret Sadness” mentions Melissa, but neglects to identify her relationship to the author.

Despite such missteps, Taylor’s book may inspire other caregivers, particularly those dealing with visual impairment and paralysis.