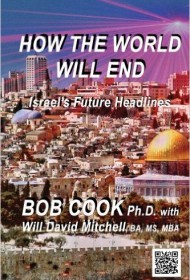 Imagine Tom Clancy’s Jack Ryan on a mission from God and you’ll know immediately if How The World Will End is a good choice for you. The story delivers a wildly over-the-top geopolitical thriller filled with larger-than-life set pieces and a plot tied to biblical prophecy.

Our hero is John Alexander, American ambassador to Israel who later resigns his post to become pastor of the First Baptist Church in Tel Aviv. The female lead is Claudia Fromm, a Jewish scientist who falls in with John after her husband is killed. Our villain is Abdul Lomadad, a terrorist who uses his father’s oil company to fund his attacks.

The plot will be familiar to Clancy fans. A secret Iranian plan aims to wipe out Israel using targeted electromagnetic pulse weapons, and Abdul has a fleet of Russian MIG-35s hidden in the Egyptian desert. The book’s core story is that the Old Testament prophecy in Ezekiel known to scholars as the war of Gog and Magog is coming.

Woven throughout is a superfluity of proselytizing about Jesus Christ, such as when John explains the virtues of the End Times to a terrorist: “Just think, if you’re alive at that time, you’ll know with absolute certainty that what you’ve been taught is wrong and the Bible has been right all along.” Not only does Claudia suddenly abandon her religion to convert to Christianity but so does the bad guy.

While Abdul is a cartoonish, clichéd villain, the authors give their heroes some nice character beats and the bravura their roles require. The military action is bombastic but entertaining, while veteran combat pilot Mitchell brings some verisimilitude to the novel’s numerous air combat scenes. Unfortunately, the book’s dismissive stance towards other religions and cultures largely undercuts its merits.

In the end, this dogmatic novel has a very niche audience: conservative American Christians whose faith gives them an unyielding certainty about the nature of God.