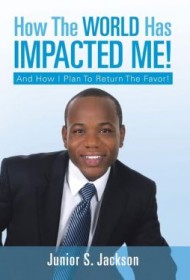 Junior S. Jackson is a young man who has seen his share of hardship and occasionally acted self-destructively. In How the World Has Impacted Me! And How I Plan to Return the Favor!, he describes those experiences, along with his goals for himself, the African-American community, and the nation as a whole.

Jackson writes briefly about a childhood bout with bone cancer that required the amputation of his leg. His father died before he was born; he was raised by his mother, who told him he needed to be “tough-tough” to survive. As a young adult, Jackson received an inheritance that he blew on parties and women. A DUI for driving while stoned landed him briefly in jail, and he resolved to get back on track, with the goal of becoming president some day.

His cheerful outlook shines through in his writing, but Jackson frequently contradicts himself, calling out African-Americans for having a sense of entitlement and no work ethic one minute, then blaming whites for denying them jobs the next. His political analysis is vague and lacks any outside references. He writes: “I want people to stand up for themselves and their families and voice their disapproval of the American political system. Not through just violence, boycott, or even civil disobedience, but through action—much-needed and well-thought-out action”; then he never spells out what that action might be.

The book ends with Jackson in college and running for a school board position. While it lacks the kind of insights and artful narrative arc that would make it appealing to a general-interest reader, the author himself is easy to root for. He appears to be on track for future success, which is itself a happy ending to a story that’s really only just beginning.