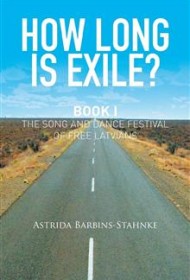 How Long is Exile? is the first in a fictional trilogy exploring a Latvian woman’s emigration to America due to WWII and the troubles she and her family endure to find an identity in a new land.

Attending a cultural festival for free Latvians in 1983, Latvian immigrant Milda Arajs recollects how her beautiful country was torn apart by a war that left her and her sister on opposite sides of the Iron Curtain. Later, she thinks back on her attempts to raise her American-born children as Latvians. Her son Gatis has been “lost” to the American melting pot, while her daughter Ilga, an opinionated poet, struggles to connect her Latvian heritage with her American upbringing. Milda also wonders if her homeland will ever be free from strict Soviet rule.

The flashbacks to Milda’s war experiences as a young girl are the novel’s strongest portions. The contrast between the innocence of Milda’s idyllic childhood in rural Latvia and the horrors of war, including the brutal murders of Milda’s Jewish friends—all seen through a child’s eyes—works particularly well.

Such ordeals make Milda’s desire to preserve Latvian traditions in her children and grandchildren understandable. Yet from a modern day perspective, Milda’s nationalistic attitude throughout the rest of the novel casts her in a less than sympathetic light. This is most clearly seen in her refusal to let her son marry an Italian woman and the implication that she is against race mixing.

Rather lengthy flashbacks to similar issues with her daughter may be off-putting to some, and the author’s writing style can sometimes feel a little jumbled (there’s an inner monologue near the novel’s beginning, for instance, that isn’t repeated anywhere else), with occasional unexplained tense shifts.

Even so, the themes of identity and cultural legacy will speak to many—not just Latvian Americans—and the war flashbacks will appeal to historical fiction fans and lend insight into a lesser-known piece of WWII history.

Also available in hardcover and ebook,