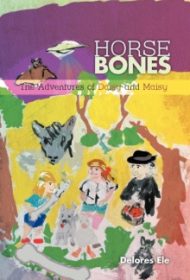 Delores Ele’s chapter book recounts the adventures of eight-year-old Daisy as she grows up in the Mississippi River Valley in 1960.

Daisy and her older sister, Maisy, have their squabbles but are overall devoted to each other. The girls both have lively imaginations and enjoy exploring the outdoors – whether sledding or pampering a tortoise. Horse Bones recounts some of their doings in short vignettes.

But the book takes an abrupt turn in its last chapters when Daisy and Maisy meet the local “witch,” Alice Kraig. Alice takes a particular interest in Daisy and believes that, although Maisy will eventually be able to fit into society, the younger girl is doomed to keep house for her sister or even be institutionalized – unless she comes to live with Alice.

With a bit of foreshadowing, this might have been an intriguing twist (although perhaps too mature for the early-reader audience toward whom Horse Bones seems geared). But this change of pace and tone is jarring considering what has come before. Daisy is a dreamer and does not always fit in, but her behavior is not that of someone mentally ill or disordered, even by the less-tolerant standards of the time. This twist may even prove alarming for young readers who feel themselves to be somehow different, given the lack of context provided.

Ele has an eye for scene-setting details, but in addition to the aforementioned major plot problem, the narrative as a whole has a sketchy, unpolished feel. The chapters that contain individual adventures feel haphazardly plotted and paced. In addition, while the black-and-white sketches that accompany the text have a certain lively charm, they are too roughly executed to enhance the story and lend a professional feel to the presentation.

Horse Bones tackles some potentially intriguing subject matter, but ultimately,  it’s a work that seems not quite sure of its audience or intent.