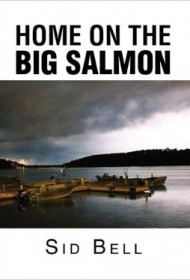 Anyone who has ever considered opting out of the rat race will admire the journey author Sid Bell recounts in his novel, Home on the Big Salmon. Bell’s story of a veteran who moves to the Canadian wilderness teems with the first-hand knowledge of a Survivalist 101 course. But unfortunately, Bell’s saga, which spans decades in an arrhythmic fashion, is told with clichÃ©d ruminations on love, marriage and family.

Bob Walker returns home from World War II eager to settle down. He meets Helen, a demure beauty who becomes his bride, and they decide to live a simple life on Big Salmon Lake. No traffic. No big city hassles. The move requires years of saving, but eventually they sell off their remaining possessions and settle into their new home near the lake. Natural dangers threaten their tranquility, from sub-zero temperatures to savage wildlife creatures. Will the fantasy of living by one’s wits match the reality they’ve chosen?

Bell’s knack for portraying nature clearly stems from his own bond with the elements. But the author appears less comfortable with dialogue and characters. Bob and his extended family are idealized to the point of distraction, and the vivid scenic portrayals Bell delivers are unable to hide the dearth of dramatic tension. Clashes between man and nature wrap in a too-tidy fashion, and the rare flashes of anger expressed by key characters resolve with boilerplate apologies.

Salmon boasts a quiet dignity often lacking in modern fiction. The Walker family epitomizes the loyalty and work ethic of the American mythos. But Bell neglects to heed essential narrative truths in sharing their fictional lives.