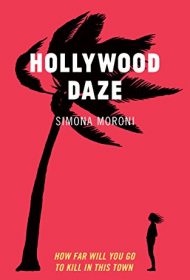 Dutch filmmaker Joost Larvink invites his young sister Mona to work her editing magic on his first big-budget production. Joost’s desire is to transform the film, a sci-fi remake of a classic Cary Grant romantic comedy, into a gay love story. Viewing the original as a piece of Hollywood history marked by fake heterosexual relationships, he emphasizes, “My Favorite Wife was a screwball comedy, and censorship created the genre.”

Artful backdrops become characters unto themselves, from seedy bars and mansions to the Woodland Hills retirement home that pays homage to aging Hollywood wannabes, where Moroni uses humor and wisdom to showcase quirky elders offering wisdom to the flailing younger generation. “LA is like bubblegum,” her new friend Bama tells her, speaking to the city’s enticement, buzz, hook and disappointment.

While youthful indiscretions might lure young adult readers, Moroni’s writing should also attract fans of Hollywood’s golden age. Appropriate details – from a Carole Lombard sequined dress and cigarettes smoked Bogart-style to movie-titled chapters and footsteps resembling “echoes like the voices in Citizen Kane’s ‘Xanadu’” – frame the characters and subplots. While typos appear throughout, they are not distracting.

One odd inconsistency: Mona, the magical film editor, is just 17 – and she’s been helping her brother for six years, which seems a stretch.

Moroni cleverly brings the story full circle with unexpected twists. While a final inference might suggest that in reality— and on the big screen— the best-laid plans sometimes go astray, in La La Land, that seems to be a sure thing.