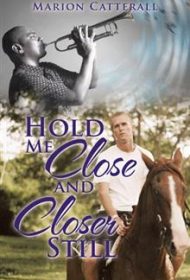 Heartbreaking, sensual, and largely uplifting, Hold Me Close and Closer Still is about one woman’s journey to find true love and happiness.

Christine Delaney is a 44-year-old widow who is in a rut. Her life since her husband’s passing has becoming boring and repetitive. Although she has plenty of friends and family, she doesn’t realize that what her life lacks is romance.

That changes when she meets Henri Chartress, a wealthy French musician. They share a night of passion, and Christine believes that their brief fling ends there. Fortunately, they reconnect and resume their intense, romantic relationship, but even with all of Henri’s money, happily-ever-after is not something that can be bought. From the beginning, Christine and Henri’s relationship is fraught with drama. They struggle with infidelity, insecurity, and Henri’s overbearing ways.

Throughout these emotional ups-and-downs, the story sometimes falters as Christine becomes increasingly unsympathetic. Best described as weak and indecisive, Christine is a frustrating character who allows her life and future to be determined by the men in her life. Even after she marries Henri and takes her place as “lady of the house,” she refuses to take responsibility for the trajectory of her life, and her role as a “doormat” can be exhausting.

In an interesting twist after her marriage to Henri, Christine allows herself to become involved with Andre, Henri’s brother. Their relationship is immediately intense, and now Christine is faced with an impossible choice: whether to save her marriage or leave everything behind to pursue a relationship with Andre.

In spite of Christine’s questionable likeability, the overall story is fast paced and complex, with plenty of drama and breathtaking emotional upheaval. The sex scenes are sensual, tasteful, and varied (with a single exception involving a non-consensual act that is necessary to the plot). Fans of contemporary romance willing to overlook the issues with Christine will find Hold Me Close and Closer Still a satisfying read.