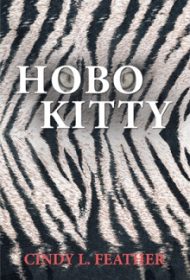 In Hobo Kitty, a woman embarks on a road trip accompanied by her spirited cat and in search of peace but soon finds herself at the center of many dramas.

Caregiver Cindy (the protagonist shares the author’s name) is depressed, suffering from low self-esteem and tired of being disrespected by her clients. After a falling out with her partner at home, she hops in her Jeep, planning to start a new life. Almost immediately, her feline companion, who enjoys riding on the Jeep’s roll bar, hijacks the trip, leading them from one adventure to another.

At the first stop, “Mow Mow Cat” leaps from the car, disappearing through the open window of a nearby house where Cindy finds Gladice Happybottom feeding the cat fried chicken. Gladice gives the cat the moniker “Hobo Kitty.” Back on the road, the cat attracts the attention of Mick Jagger and bandmates, who are headed to a concert. Jagger wants to buy her, but Cindy declines.

Following this, the pair rescues flood victims; herds beached whales back into the water; delivers a baby, survives a shark attack and more. They are feted as heroes as they move from one fantastical adventure to the next.

The story begins on a serious note, but soon changes to one of farce and fantasy, with each encounter strengthening Cindy’s fragile emotional state. Although Cindy and Hobo Kitty frequently face danger, the stories can be quite entertaining, as when the two are taken for a ride on a whale’s back. While Cindy is a fully developed character, others are largely stereotypes as suggested by their names (Officer Dick Weed, farmer Ted Trueblue, etc.).

There are numerous editing issues, such as missing spaces between words, and occasional puzzling sentences, such as, “She scored down the hall” or “…I heard the oven busy.”

Further polishing would improve the tale. Still, the story may be enjoyed by readers who appreciate an original yarn filled with larger-than-life adventures.