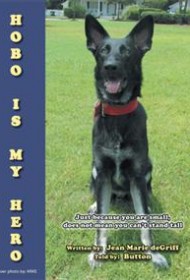 Based on true events, Hobo Is My Hero tells the story of a puppy named Button who gets lost. Eventually, she stumbles upon a gentle German Shepherd named Hobo who shares his shelter and helps Button find her way safely home.

One day, while Button and her sister are eating their dinner, their cousin suddenly gobbles up their food. When their owner/Mom screams at the cousin to stop, she inadvertently frightens the young puppies. They run outside through their doggy-door. Button’s sister wisely stops, but Button keeps running, and soon she is lost.

For days, Button fends for herself, holding her ground against horses, a massive rodent, a raccoon, and a fox that seems hungrier than she is. She is plagued by ants and drenched by storms. Happily, she finally meets Hobo and manages to creep into his new friend’s doghouse and snuggle up. The next morning, Hobo’s people – a woman named Jane and a little girl named Dallas – help Button find her family. Inspired by Hobo, Button decides to dedicate her life to helping others by becoming a rescue dog.

Hobo tells children that anything can be survived if you don’t give up. In fact, during one’s darkest hour it’s possible to discover your life’s calling. That being said, the book may frighten children for many reasons. The idea of getting lost is terrifying to most, and Button’s journey is grim. Also, at the beginning, it isn’t immediately clear that the author is writing about a dog, not a child. This confusion makes the mother’s anger scary: is she a force for good or not?

The illustrations are didactic without being playful, and the pages are too text-dense for a children’s picture book. Ultimately, this book will resonate most deeply with the author’s friends and family who already know the true story on which the book is based.