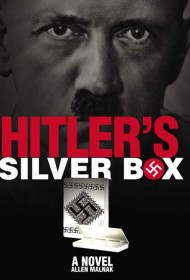 In his mystery and suspense debut novel, Allen Malnak fashions a compelling story that opens in the present but has roots in world events 50 years past.

As the chief ER resident at Chicago’s Cook County Hospital, Dr. Bruce Starkman is consumed with his career. While taking some hard-earned time off, Starkman receives devastating news: his beloved uncle Max Bloomberg has died. Adding to Starkman’s dismay is the fact that his uncle’s body was cremated at an Irish-Catholic funeral home. This is especially puzzling, since Uncle Max was a devout Orthodox Jew.

Soon the doctor is pursuing leads from clues left by his clever uncle and evading the clutches of a small band of unknown but determined killers. Eventually the trail leads Starkman to Europe.

Malnak has employed a creative and attention-grabbing framework that utilizes quotes from Uncle Max’s journal at the beginning of each chapter. The journal describes Max’s incarceration in Theresienstadt concentration camp during WWII. This camp was used as a showcase for culturally important and prominent Jewish prisoners, and Max was singled out by a Nazi colonel to produce a special silver box for Hitler’s birthday. Hidden within the box are documents that could change the world as we know it.

Following clues left in Max’s journal, Starkman discovers a descendant of Max’s friend from Theresienstadt. The ticking clock looms over the duo as they try to prevent a 21st century Holocaust and their own deaths.

Malnak has obviously done extensive research into the Third Reich and Theresienstadt, which lends his story believability and helps drive the action. As a medical doctor, Malnak’s expertise shows up in many scenes, although sometimes the attention to detail slows the action. Despite a few quibbles with some overly convenient assistance to the hero, however, this is a fine first effort and an engaging read.

Blue Ink Heads-Up: This book will appeal to readers interested in stories about the Holocaust and conditions in concentration camps.