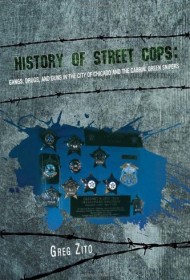 History of Street Cops takes readers through the dangerous, gang-filled streets on the West Side of Chicago as Greg Zito and his partners on street patrol chase down various crimes, make arrests and confiscate large caches of weapons. This uneven memoir’s events are recalled from Zito’s 19 years of active duty, from 1967 to 1986.

After a short stint nabbing rapists, muggers and pickpockets for the Chicago Transit Authority Police, Zito moved to the Chicago Police Department where he worked as a patrol officer, did mob surveillance and became a gang crimes specialist. Many of his thousands of arrests involved gang members who ruled the Cabrini-Green public housing development, where shootings, narcotic use, rapes and homicides were a daily occurrence. Zito quickly learned the city was teeming with dozens of armed gangs that had thousands of members. He and his partners confiscated more than 2,400 weapons in 18 years. In 1986, Zito was forced to retire after being severely beaten during a police action.

Besides detailing various events and arrests, the author lists gang names and includes several black-and-white photos showing confiscated weapons and his partners and himself, as well as reprints from articles about significant arrests in which he was involved. He also gives accounts of some practical jokes he and his partners played on one another for occasional stress relief.

On the plus side, the book builds a strong picture of the risky daily life police choose “because we care.” However, while the author states that being a police officer is “exciting, interesting, dangerous, and nerve-racking,” he writes in such a matter-of-fact tone that it flattens the dramatic and intensive effect of the you-are-there police chases, busts and arrests. The book also is rife with repetition, which drags down the storytelling.

Overall, while Zito’s book offers a clear look at his highly active life as a cop, its disorganized style and repetition lower its appeal by several notches.