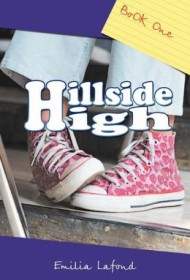 The first book in Emilia Lafond’s Hillside High series introduces readers to an expansive cast of characters that largely consists of a familiar upper-middle-class demographic preoccupied by sports, parties, and romance.

As the story opens, various subplots are introduced: Four good friends gossip about boys; a basketball player gets scolded by his coach for not being a team player; a beautiful, popular girl catches a ride from a boy with an expensive new convertible. Some stories evolve—couples form, a girl struggles with the idea of confronting her brother’s binge drinking—but the book lacks a central plot arc and fails to provide major obstacles that are solved.

As the first in a series, Hillside High is ambitious and sprawling, but its ambition is also its downfall. Its many characters embody high school but without significant adversity: They do well enough in class, go to the mall on weekends, party—but not too hard—and get along with their parents. The drama picks up at the very end, seemingly foreshadowing book two, but the number of characters and lack of a significant plot make it difficult to distinguish between characters or invest in their circumstances. As a result, readers will have trouble keeping characters’ relationships and motivations straight. And while tweens looking for mild escapism will find it at Hillside, the lack of drama and glamor prevents the book from being a fix for Gossip Girl fans.

Without a core plot or compelling drama of its own, Hillside High reads like a very long introduction to a future book. Readers who love contemporary YA may want to try the series anyway, but they should know that the real story seems set to start in book two.