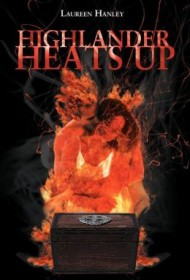 This time-travel romance follows a trio of young women who are whisked from from modern day Florida via magical means back to 1513 Scotland. It is well written, briskly paced, and adeptly plotted. Readers beware, however: it’s also filled with misogynistic male leads and numerous sequences of women getting brutally assaulted, raped, and even murdered. Additionally, it features female characters that, after witnessing these atrocities, still profess their undying love for the men committing the acts of brutality.

Admittedly, author Laureen Hanley has attempted to stay true to her characters, and (at least according to this novel) women had no rights in 16th century Scotland and were treated terribly. That said, it’s hard to root for a man who says to the woman he supposedly loves: “If you open your pretty mouth just once, I swear, I will put my fist in it.”

The story largely revolves around Monica, a headstrong 21st century woman, and Lucas, who is next in line to be his clan’s chief. At first, the sexual tension between them is dynamic, but after numerous physical and verbal altercations, it quickly turns into a dysfunctional relationship of epic proportions.

If the main characters aren’t endearing or relatable, the rest of the story suffers — and that’s what happens here. Lucas is the stereotypical chauvinistic bully — at one point he even throws Monica over his shoulder and swats her behind — and Monica, for all her posturing, is the woman with the fragile eggshell ego who will do anything to keep her man, even if he cheats on her and abuses her. “She didn’t know how long she could hold him, but she would as long as he let her.”