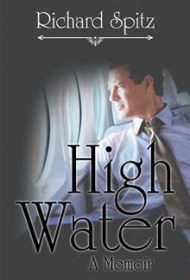 In workmanlike prose with occasional issues—names spelled inconsistently, misquoting famous lines, and passages that meander—Spitz describes growing up with an abusive father who wanted him to achieve great things. The story opens with the author and two friends running away from Maine to try and make it in Florida; eventually all three return home. Kicked out of the prep school his dad sent him to for sneaking out at night, he again tries to find his own way, working a variety of jobs and eventually agreeing to attend law school.

After this part, which takes up roughly 50 pages, most stories focus on the people Spitz was surrounded by: a mix of conveniently available women, moonshiners, grifters, and cops.

Many of Spitz’s stories take surprising turns. An anecdote about his attendance at a local Elks club dance, for example, leads to the revelation that the bandleader had murdered an entire family: “The police handcuffed and took him right off the bandstand.” An innkeeper Spitz knows is involved in a convoluted love triangle and his death is ruled a suicide, but the author suggests it was murder. Such stories are fun to read, but none are explored in detail and they detract from the feeling of reading a memoir. The last chapter is a jarring and aggressive criticism of Bill and Hillary Clinton.

Spitz could take three or four of his juicier stories and expand them into a pulpy joyride in which he plays a small part. Or he could focus more on the art of memoir and offer greater insight into his father’s temper, his mother’s surviving an abusive marriage, and how those things shaped him growing up. Here he tries to do both, to mixed effect. While High Water has its moments, it could be so much more.