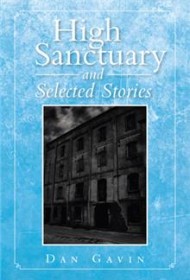 Writer Dan Gavin is a much-decorated veteran of the Los Angeles Police Department. So it’s surprising that the hero of the 64-page novella that makes up the bulk of his book is a New York cop.

Gavin’s male characters are mostly classic no-nonsense tough guys. In the novella, a burly ex-pro football player, Sergeant Mike Tellison, works a crime-infested Brooklyn ‘hood called “Dunnisville,” in the turbulent 1960s. After youth-gang members shoot Tellison, he wakes up bandaged and in a secret garden-refuge from evil—and a changing world—that an eccentric old New England couple have created on the roof of an abandoned factory.

So far, great: High above the streets of hell, here’s Paradise Regained, complete with a babbling brook, milk-goat and old-fashioned spelling bees for entertainment. But Gavin largely squanders the dramatic possibilities. His geriatric idealists drift into cutesy nostalgia (things are “durn good” or “over yonder”). And his writing is often careless: He incorrectly uses “disinterested” for “uninterested,” “enuf” for “enough,” and so on. Readers also endure the hero’s sidetrack rants against liberal bleeding hearts, the New York Times and an inane TV reporter, but that’s easy to forgive; it’s just defensive cop politics talking.

Three short stories fill out this slim volume. “The Eldritch Depot,” set near a haunted train station in gloomy Baluchistan, and ”Druid Island,” where ill-defined devils lurk, are overheated ghost stories that faintly recall Poe. More enjoyable is “The Impossible Homicide,” which posits a fatal shark attack with its roots in a clever, science-based plot hatched by the victim himself. It’s the highlight of the book.

Gavin’s social fantasy novella has a seed of real quality but might have been better realized had it been set in L.A., where the author spent 30 years as a vice cop, narc and homicide detective. His work would also greatly benefit from more attention to language.

Overall, readers will find some intrigue in this collection, despite its inconsistent quality.